Once you are finished with your definition you’ll need to place the new term into context with other terms. It allows your readers to see how terms interact with each other. It allows Natural Language Processing Engines to relate terms together. It is the core in pattern-matching for harmonizing regulatory structures to each other.

The following basic relationships have been taken from the Simple Knowledge Organization System’s (SKOS) Mapping Vocabulary Specification[1], as shown below. 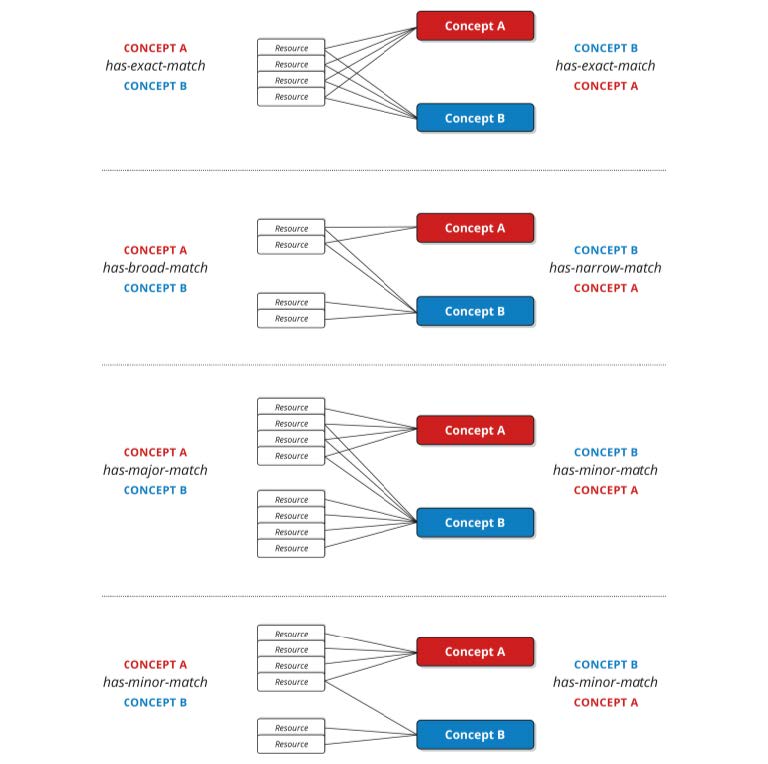 They offer the ability to distinguish subtle relationships between two terms. As stated in the specification, “Many knowledge organization systems, such as thesauri, taxonomies, classification schemes and subject heading systems, share a similar structure, and are used in similar applications. SKOS captures much of this similarity and makes it explicit, to enable data and technology sharing across diverse applications.”

The limitations with basic semantic relationships based off the SKOS model

The problem in the SKOS model is relationships are limited to a single term or a single phrase. This model is great if you want to know that draft or chart is the same as map or not as broad as interpret. Basically, you are limited to three categories for practical purposes; broader, same, and narrower as shown in the diagram below. 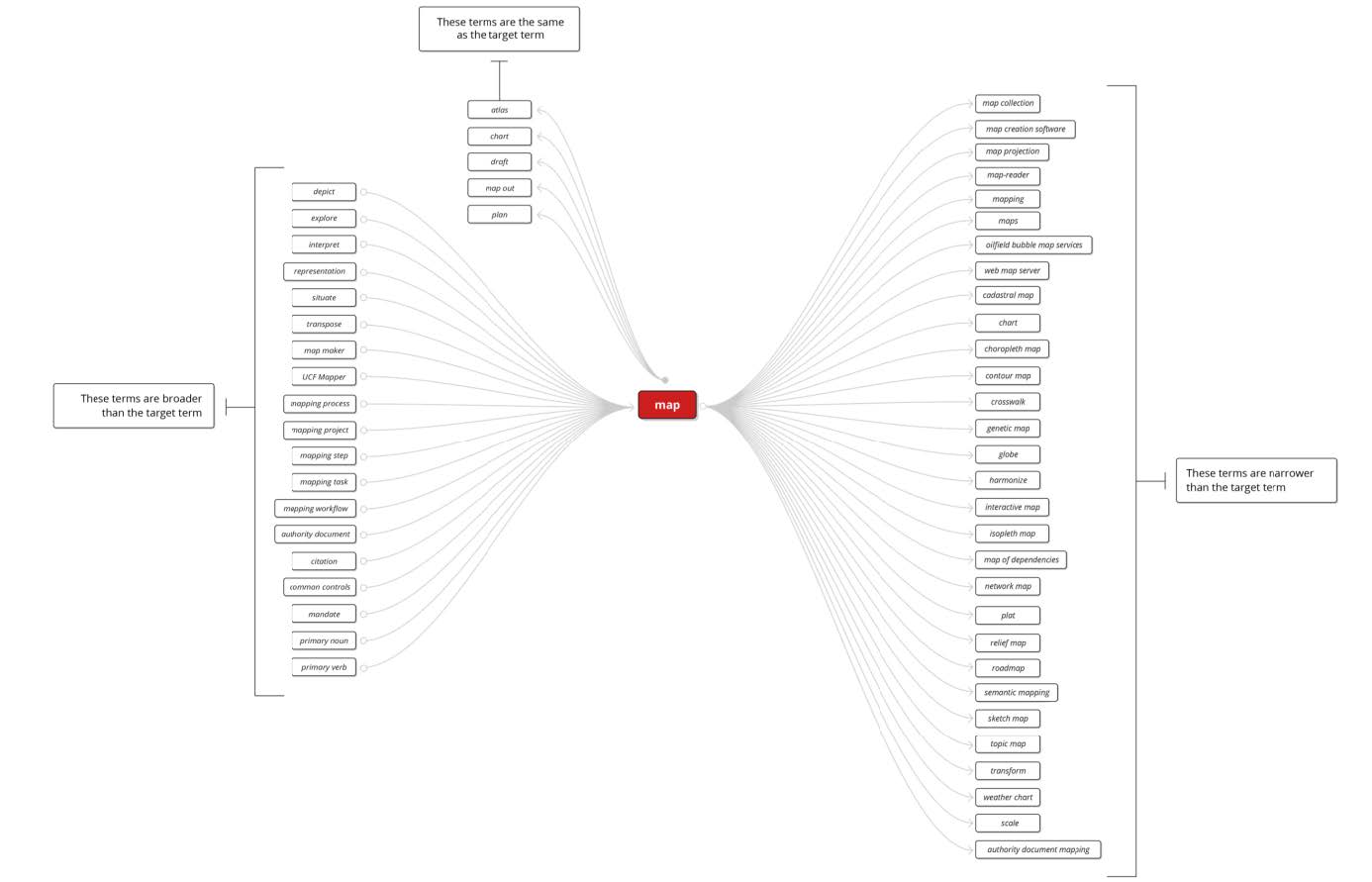 What the SKOS and basic semantic relationship model doesn’t tell you is why interpret is a broader concept, or why scale is a narrower concept. What they don’t show are the linguistic relationships between the terms. 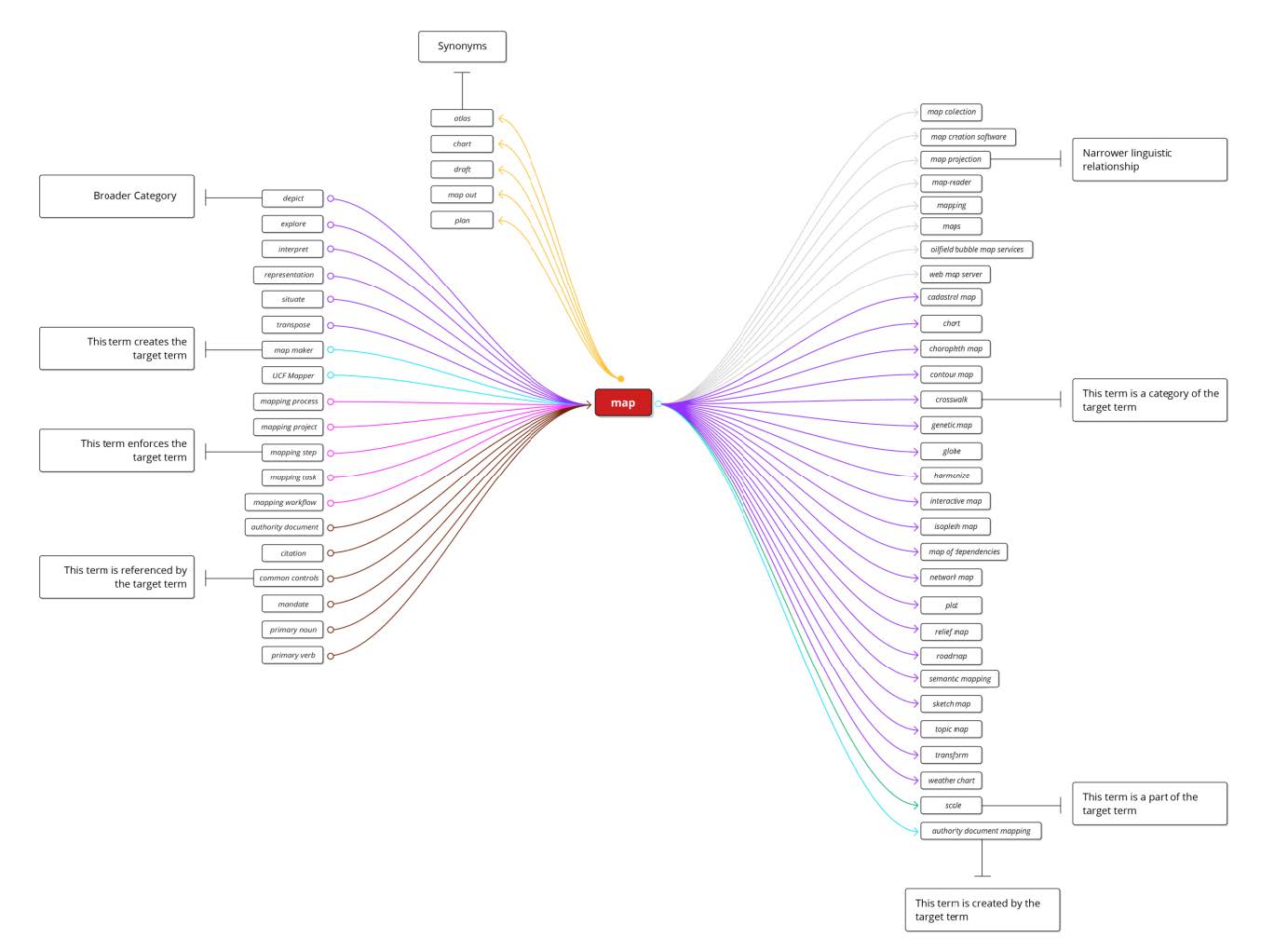 Synonyms and Antonyms instead of has-exact-match

Synonyms are broader than exact matches, as they extend the relationship to facts or states of having correlation, interrelation, materiality, conformity, and pertinence between concept A and concept B. And antonyms then have enough variability, incongruence, and disassociation to be their opposite. The antonym is the inverse of the synonym and vice versa.

Included in the type of synonyms is metonymy, the semantic relationship that exists between two words (or a word and an expression) in which one of the words is metaphorically used in place of the other word (or expression) in particular contexts to convey the same meaning.

Included in the category of antonyms are complementary pairs, gradable pairs, and relational opposites[2].

Complementary pairs are antonyms in which the presence of one quality or state signifies the absence of the other and vice versa. A couple of samples are single/ married, not pregnant/pregnant. There are no intermediate states in complementary pairs.

Gradable pairs are antonyms which allow for a natural, gradual transition between two poles. A couple of examples are good/bad, hot/cold. It is possible to be a little cold or very cold, etc.

Relational opposites are antonyms which share the same semantic features, only the focus, or direction, is reversed. A couple of examples are tied/untied, buy/sell, give/receive, teacher/pupil, father/son, and open/refrain from opening.

A spigot and a faucet are two defined words that are exact matches, or synonyms, of each other. That’s an easy rule to implement. However, language is messy, and the uses of language within compliance documents is even messier. That’s why you must have advanced rules that go beyond synonyms for use cases such as a personal data request being called a request for personal data, an information request from the data controller, or even a request for information on the processing of personal data. To handle these types of use cases you must have a semantic rule that says “if the definition of a term-of-art matches the definition of a previously accepted dictionary term, the term-of-art should be considered an exact match and therefore be labelled a non-standard representation of the accepted term”.

Replacing the broad and narrow matches with more specific categorization

The major and minor relationships described in the SKOS model are limited to linguistic parents and their children (or half children as a minor match might be thought of). However, there are many relationships that are more specific that can and should be applied, especially when working with named entities and leveraging a Natural Language Processor’s named entity recognition engine. By replacing the simple broader and narrower matches with more specific categorization, you can achieve structures like those employed by the Compliance Dictionary, as shown below.

As of this writing, there isn’t a computer system that will automatically analyze terms, even in their context within a document, and determine what the relationships should be. At best, they are running between 40-45% accurate[3]. This means you’ll want to manually ask yourself the questions, which isn’t really that hard[4]. Here’s our cheat sheet for you.

By creating semantic relationships to your definitions, the reader will be able to understand how the term works with other terms.